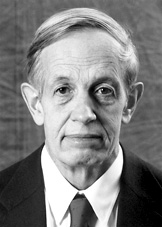 Although the world has lost a great and beautiful mind in John Nash, his concepts and theories are very much alive in this world. He and his wife were tragically killed in an automobile accident in New Jersey last week.

John Nash is the Nobel prize winning genius behind the “Nash Equilibrium”. He showed that every game played between two or more players will always achieve a stable state, from which either player will only incur further losses if something else is played. Thus, they have reached the rational play, knowing what the other player’s strategy is and there is no point in changing their strategy based on what they know of their opponent’s strategy. This does not mean that this is the play where they can maximize their gains. The Nash equilibrium may not always represent the best outcome for either player.

For example, in the famous Prisoner’s Dilemma game, the Nash Equilibrium represents the state where both players should confess. This play is not the one where either party can maximize their gains, but this is the play where they minimize their losses based on what the other player is playing. If they both remain silent, they both get 1 year each. However, if one confesses and the other remains silent, the one confessing gets 0 years. And the one remaining silent gets 20 years. Thus, no matter what, the “rational choice” is to confess. Sadly, the mutually beneficial state of remaining silent is not the best rational choice here. 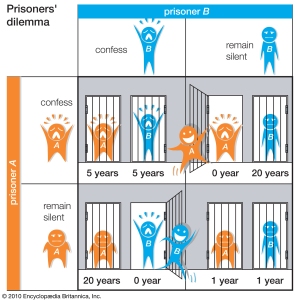 In a non-cooperative situation, Nash Equilibrium will almost always result in a less than desired state. In the case of the prisoner’s dilemma example above, the values (how many years) were chosen for explanation. These values are called “utilities”. Sometimes, this is a personal preference. For example, if there are cars parked in the street coming to my house, there is space for only one car to drive in the street. If I have a car coming in the opposite direction, and if that car has the right of way (if the parked car is on my side of the street), I may not assign a large value for not going first. I am not going to lose any sleep over letting the other guy go in front of me. If there is a tornado behind me, I may assign a larger value as my utility and thus have higher motivation to cut the driver opposite of me, even if he had the right of way. For the game theory enthusiasts, this is a form of game called “Chicken”. As you can imagine, if you do not know the value assigned by the opponent, you may not always make the best move.

Game theory is unfortunately alive and well at the work place as many research studies have shown. Whenever there is a form of negotiation going on there is always a possibility of a non-cooperative situation and this can lead into not so favorable outcomes, as result of the Nash Equilibrium states. A game can have multiple Nash Equilibrium states based on the opponent’s strategy. Here are some key points that can help you in dealing with the traps set by the Nash Equilibrium when you are in a bad spot. The strategies below are geared towards minimizing the imbalance in the games.

Believe it or not, the best thing to do in a repeat play game is to be the nice guy first. The strategy Tit for Tat requires you to play what the other player played last. Thus, if he was nice to you first, you play nice in the next game. If he was not nice, you also do not play nice in the next game. Thus, you are forming an immediate feedback loop to the opponent, and directing how the game shall be played. It actually might help to be the kinder person first, putting your best foot forward. This is best played between people with equal standing.

As I indicated before, if you do not know what the value is assigned by your opponent, your strategy may be futile. Information is gold currency when it comes to playing games. You can signal to your opponent that you value X, while you are after Y. You can also trade key information as needed to gain trust as well. It is also wise to reveal only what is required. A good example is when you play poker.

Simply put, change the rules of the game or the game itself, if you do not like what you are playing. You may try to change how the value is perceived or try to include a new value altogether that changes the initial game. If the venue for the game was telephone, arrange for a face to face meeting.

How many times have you said, “I would like to talk to your supervisor”? Nobody can be 100% confident or sure about themselves. Bringing in an authority generally will make the opponent self-conscious and even self-doubting, giving you an advantage.

Sometimes, it makes sense to bring in more people into the game, even if they are going to be spectators and not going to be on your side. Nobody wants to be seen as the bully or the bad guy. Nonviolent and peaceful protests are examples of this strategy. The press and media are there to catch/witness any misstep that the opponent might take.

An easy example here is if you do your homework before going to purchase a car, and inform the salesman that you know the other vendor sells it for much less a price. You can also state your past experience as a guideline of what you are expecting out of the game.

Disclaimer: Please note that this post is purely based on my opinion and not to be used as advice. I shall not be responsible for any possible outcomes. I have not delved into much depth regarding the Nash Equilibrium or Game Theory itself. This is a vast and very interesting topic. I encourage the reader to learn about this fascinating field as much as possible.