I recently read the wonderful book “How Not To Be Wrong, The Power of Mathematical Thinking” by Jordan Ellenberg. I found the book to be enlightening and a great read. Jordan Ellenberg has the unique combination of being knowledgeable and capable of teaching in a humorous and engaging way. One of the gems in the book is – “Which way you should go depends on where you are”. This lesson is about the dangers of misapplying linearity. When we are thinking in terms of abstract concepts, the path from point A to point B may appear to be linear. After all, the shortest path between two points is a straight line. This type of thinking is linear thinking.

To illustrate this, let’s take the example of poor quality issues on the line. The first instinct to improve quality is to increase inspection. In this case, point A = poor quality, and point B = higher quality. If we plot this incorrect relationship between Quality and Inspection, we may assume it as a linear relationship – increasing inspection results in better quality.

However, increasing inspection will not result in better quality in the long run and will result in higher costs of production. We must build quality in as part of the normal process at the source and not rely on inspection. In TPS, there are several ways to do this including Poka Yoke and Jidoka.

In a similar fashion, we may look at increasing the number of operators in the hopes of increasing productivity. This may work initially. However, increasing production at the wrong points in the assembly chain can hinder the overall production and decrease overall productivity. Taiichi Ohno, the father of Toyota Production System, always asked to reduce the number of operators to improve the flow. Toyota Production System relies on the thinking of the people to improve the overall system.

The two cases discussed above are nonlinear in nature. Thus increasing one factor may increase the response factor initially. However, continually increasing the factor can yield negative results. One example of a non-linear relationship is shown below: 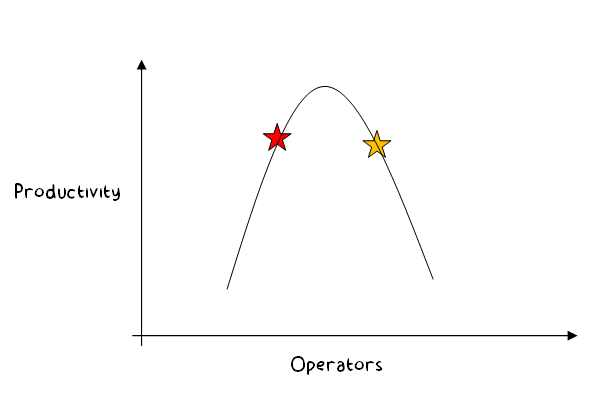 In order to know where you are, you need to understand your process. As part of this, you need to understand the significant factors in the process. You also need to understand the boundaries of the process where things will start to breakdown. The only way you can truly learn your process is through experimentation and constant monitoring. It is likely that you did not consider all of the factors or the interactions. Everything is in flux and the only constant thing is change. You should be open for input from the operators and allow improvements to happen from the bottom up.

I will finish off with the anecdote of the “Laffer curve” that Jordan Ellenberg used to illustrate the concept of nonlinearity. One polical party in America have been pushing for lowering taxes on the wealthy. The conservatives made this concept popular using the Laffer curve. Arthur Laffer was an economics professor at the University of Chicago. The story goes that Arthur Laffer drew the curve on the back of a napkin during dinner in 1974 with the senior members of then President Gerald Ford’s administration. The Laffer Curve is shown below: 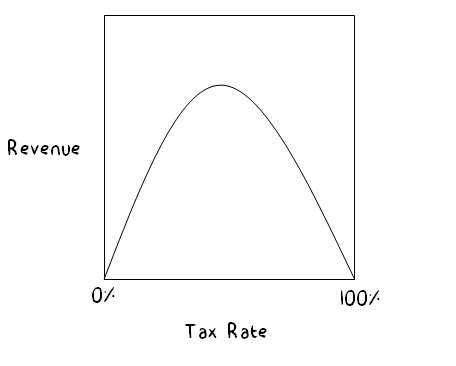 The horizontal axis shows the tax rate and the vertical axis shows the revenue that is generated from taxation. If there is no taxation, then there is no revenue. If there is 100% taxation, there is also no revenue because nobody would want to work and make money, if they cannot hold on to it. The argument that was raised was that America was on the right hand side of the curve and thus reducing taxation would increase revenue. It has been challenged whether this assumption was correct. Jordan used the following passage from Greg Manikiw, a Harvard economist and a Republican who chaired the Council of Economic Advisors under the second President Bush:

Subsequent history failed to confirm Laffer’s conjecture that lower tax rates would raise tax revenue. When Reagan cut taxes after he was elected, the result was less tax revenue, not more. Revenue from personal income taxes fell by 9 percent from 1980 to 1984, even though average income grew by 4 percent over this period. Yet once the policy was in place, it was hard to reverse.

The Laffer curve may not be symmetric as shown above. The curve may not be smooth and even as shown above and could be a completely different curve altogether. Jordan states in the book – All the Laffer curve says is that lower taxes could, under some circumstances, increase tax revenue; but figuring out what those circumstances are requires deep, difficult, empirical work, the kind of work that doesn’t fit on a napkin.

In case you missed it, my last post was Epistemology at the Gemba:

I recently finished reading the book “The Mythical Man-Month”. This book was written by Frederick Brooks Jr. and first published in 1975. This book has been quoted as “the Bible of Software Engineering.” It is based on the experiences of the author at IBM while managing the development of OS/360.

Although the topic of the book is software engineering, I believe that the principles identified in the book are applicable to any project.

The main idea of the book is about the mythical man-month which may be intuitive to some people. This basically can be explained as follows;

Brooks says “Man-month as a unit for measuring the size of the job is a dangerous and deceptive myth.”

This book also gave us Brook’s law. Brook’s law can be stated as follows;

“Adding manpower to a late software project makes it later.”

There is some resemblance to Braess’ paradox in traffic networks, which can be loosely stated as “Adding extra capacity to a network in some cases brings down the overall performance of the network”. I will discuss more about Braess’ paradox at a later time.

There are multiple factors that make Brook’s law work. The first is the amount of time needed for a new member to get accustomed to the project. This is treated as “ramp-up” time. The second factor is communication. As more members are added to a team, the complexity of communication requirements increases. This is referred to as communication overhead. The third factor is the project type. If there are sequential tasks that are independent in nature, this results in delays due to the first two factors. When a task cannot be partitioned because of sequential constraints, the application of more effort has no effect on the schedule. In Brooks’ words; “The bearing of a child takes nine months, no matter how many women are assigned.”

Why Did the Tower of Babel Fall?

This is perhaps the section that I enjoyed the most. Brooks performs a “management audit” on the Babel project. The tower of Babel is a famous story in Bible, in the book of Genesis. The people of the world wanted to build a tower that reached to the heavens. In the story, the people spoke only one language, and God made the people speak in different languages so that they could not understand each other, and the tower was never completed.

Brooks reviewed the following factors for the “Babel Project”;

Manpower: There was plenty of manpower.

Materials: Clay and asphalt were abundant.

Time: There was no time constraint noted in the story.

Technology: The technology available at that time was adequate.

The Tower of Babel was never built because of two reasons – communication and organization. Brooks explains that lack of effective communication led to lack of coordination. When coordination failed, the project came to a halt. In today’s world, lack of effective communication is very relevant. In my view, the point of organization is about system optimization. Pursuit of local optimization will always result in a decrease of system performance.

I highly encourage the reader to read the Mythical Man-Month book. The first edition is available electronically here.

I will end with a story I heard about project management.

A man is flying in a hot air balloon and realizes he is lost. He reduces height and spots a man down below. He lowers the balloon further and shouts:

“Excuse me, can you help me? I promised my friend, I would meet him half an hour ago, but I don’t know where I am.”

The man below says, “Yes, you are in a hot air balloon, hovering approximately 30 feet above this field. You are between 40 and 42 degrees North latitude, and between 58 and 60 degrees West longitude.”

“You must be an Engineer,” says the balloonist.

“Well,” says the balloonist, “everything you have told me is technically correct, but I have no idea what to make of your information, and the fact is I am still lost.”

The man below says, “You must be a project manager”

“I am,” replies the balloonist, “but how did you know?”

“Well,” says the man, “you don’t know where you are or where you are going. You have made a promise which you have no idea how to keep, and you expect me to solve your problem. The fact is you are in the exact same position you were in before we met, but now it is somehow my fault.”

In case you missed it, my last post was about “The Mystery of Missing Advent Calendar Chocolates”.