In any introduction class to systems thinking, we get introduced to the idea of analysis and synthesis. As Russell Ackoff, the giant in Systems Thinking, teaches us:

A system is a whole which consists of a set of two or more parts. Each part affects the behavior of the whole, depending on how it interacts with the other parts of the system. To understand a system, analysis says to take it apart. But when you take a system apart, it loses all of its essential properties. The discovery that you cannot understand the nature of a system by analysis forced us to realize that another type of thinking was required. Not surprisingly, it came to be called synthesis.

Analysis… reveals structure— how a system works. If you want to repair an automobile, you have to analyze it to find what part isn’t working. Synthesis reveals understanding—why it works the way it does. The automobile, for example, was originally developed for six passengers. But no amount of analysis will help you to find out why. The answer lies in the fact that cars were designed for the average American family, which happened to be 5.6 at the time.

Lillian Gilbreth also talked about analysis and synthesis, back in 1914, in her book, The Psychology of Management. Gilbreth discussed ideas from the British psychologist, James Sully.

Analysis is defined by Sully as follows: “Analysis” is “taking apart more complex processes in order to single out for special inspection their several constituent processes.” He divides elements of thought activity into two:

(a) analysis: abstraction, (b) synthesis: comparison.”

Gilbreth further clarified what an analyst does:

ANALYST’S WORK IS DIVISION. – It is the duty of the analyst to divide the work that he is set to study into the minutest divisions possible.

She went on to describe the qualifications of an analyst.

QUALIFICATIONS OF AN ANALYST. – To be most successful, an analyst should have ingenuity, patience, and that love of dividing a process into its component parts and studying each separate part that characterizes the analytic mind. The analyst must be capable of doing accurate work, and orderly work.

To get the most pleasure and profit from his work he should realize that his great, underlying purpose is to relieve the worker of unnecessary fatigue, to shorten his work period per day, and to increase the number of his days and years of higher earning power. With this realization will come an added interest in his subject.

Gilbreth defined the role of a synthesist as follows:

THE SYNTHESIST’S WORK IS SELECTION AND ADDITION. – The synthesist studies the individual results of the analyst’s work, and their inter-relation, and determines which of these should be combined, and in what manner, for the most economic result. His duty is to construct that combination of the elements which will be most efficient.

The qualifications of a synthesist was explained as:

QUALIFICATIONS OF THE SYNTHESIST. – The synthesist must have a constructive mind, for he determines the sequence of events as well as the method of attack. He must have the ability to see the completed whole which he is trying to make, and to regard the elements with which he works not only as units, but in relation to each other. He must feel that any combination is influenced not only by the elements that go into it, but by the inter-relation between these elements. This differs for different combinations as in a kaleidoscope.

The relationship between the analyst and synthesist was best explained by Gilbreth as:

If synthesis in Scientific Management were nothing more than combining all the elements that result from analysis into a whole, it would be valuable. Any process studied analytically will be performed more intelligently, even if there is no change in the method. But the most important part of the synthesist’s work is the actual elimination of elements which are useless, and the combination of the remaining elements in such a way, or sequence, or schedule, that a far better method than the one analyzed will result.

Lillian Gilbreth’s ideas, as the cliché goes, were truly ahead of her times. We have all benefited from her brilliance. Gilbreth viewed a synthesist as a conserver of a valuable elements as well as an inventor involved in invention of better methods of doing work, such as tools or equipment. She also said that a synthesist is a discoverer of laws because they have the ability to understand why the parts are working the way they are, in relation to one another. A systems thinker fuses analysis and synthesis. Moreover, a systems thinker should be able to find differences among apparently similar things and similarities among apparently different things.

I will finish with further ideas from the 18th century French Philosopher Victor Cousin:

In case you missed it, my last post was The Truths of Complexity:

Today (May 8, 2016) is Mother’s day.  In today’s post I will be writing about somebody who has been called “the mother of modern management”, and “America’s First Lady of Engineering”, in addition to several additional similar titles.

Many of her concepts and ideas lend really well to the Toyota Production System. I will be looking at Lillian Moller Gilbreth, the wife of Frank Gilbreth. The Gilbreths were famous for the time and motion studies, and were most likely the first successful management consultant couple. Lillian did not study Engineering at school. She had a Bachelor’s and Master’s Degree in Literature, and a Doctoral degree in Psychology. Frank Gilbreth did not attend college, although he was admitted to Massachusetts Institute of Technology. The Gilbreths were considered to be experts in Industrial Engineering.

Taylorism was already popular in those days(early 1900’s). Taylorism became popular as “Scientific Management”, and triggered a push for efficiency. Taylorism promised eliminating wasted motions, and “loafing off” by the employees. However, the outcome of Taylorism was to see the operators as machines. They were required to bring only their hands and not their brains to work.

The Gilbreths understood the failure point in Taylorism – the focus is strictly on the efficiency alone and nothing else. They understood that they needed to engage the operators. Lillian’s background in Psychology helped in this regard. They began to understand that the focus should be on motion rather than time, and they started concentrating on “fatigue”. Lillian worked with her husband to organize the work so that it was easier for the operators to do their work. She asked for input from the operators to identify the best way to do the job. Lillian also had a background as a teacher. She adapted teaching techniques so that the operators were able to learn better and understand the “why” and the “how”. She championed for the “human element”. In my opinion, she pioneered the “humanistic Taylorism” well before Toyota.

Lillian was a firm believer in Visual Management. She made work visible at home. You can find the undercurrents of “Personal Kanban” in a speech she gave to National Federation of Business and Professional Women’s Clubs in New York. Personal Kanban has gained traction in recent years as a way to implement the ideas of flow, limited work-in-process and visual management for projects.

We considered our time too valuable to be devoted to actual labor in the home. We were executives. So we worked out a plan for the running of our house, adopting charts and a maintenance and follow-up system as is used in factories. When one of the children took a bath or brushed his teeth he made a cross on a chart. Household tasks were divided between the children. We had three rows of hooks, one marked “Jobs to be done,” one marked “Jobs being done” and a third marked” Jobs completed” with tags which were moved from hook to hook to indicate the progress of the task. (Source: 1930 Speech by Lillian Gilbreth to National Federation of Business and Professional Women’s Clubs in New York)

The Gilbreths pushed for “one best way” to do a job. They believed that workplace organization would improve the flow of the process. Lillian taught the idea of being “motion-minded” – being aware of the motions that you use while doing your job at work or even in a kitchen. The Gilbreths were very confident in their process that they promised a reduction of 33% in work motions in any industry. 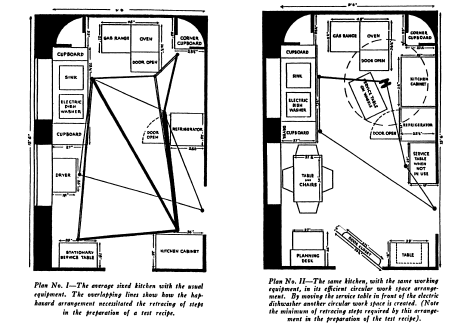 Lillian became popular with her analysis of the layout of kitchen during her work at General Electric as an Industrial Engineer. As part of her research, she interviewed over 4000 women and gathered data on proper heights for stoves, sinks and other kitchen appliances. She also identified the best layout to reduce the number of steps taken. She introduced the idea of the “Work Triangle”. In an efficiently planned kitchen, the perimeter of the triangle formed by stove, sink, and refrigerator should be no greater than 26 feet, with a typical distance of 5.5 feet between appliances. The kitchen was laid out in different patterns like “L”, “C” or “U” to better aid the homemaker (Lillian preferred the term “homemaker” to “housewife”). Lillian also introduced the idea of using a roller cart in the kitchen. All the improvements she proposed were tested out in 1931 Better Homes Manual. For the study, a strawberry shortcake was made in the old-style kitchen and in the new-style kitchen. The results were outstanding. The number of operations was reduced from 97 to 64, and the number of steps taken was reduced from 281 to 45, much better than the 33% reduction claim.

Lillian Gilbreth is now perhaps popular for her work in reinventing the modern kitchen or as the mother in the “Cheaper by the Dozen” movies. However, she was much more beyond that. She was an inventor. Her inventions include the foot-pedal trash can and shelves inside refrigerator doors. She faced lot of adversities due to her gender. Lillian authored “The Psychology of Management” in 1914. Her publisher insisted that her name be printed as “L. M. Gilbreth” to hide the fact that the book is written by a woman. Frank died suddenly due to a heart attack at the age of 56. Several of the Gilbreth’s clients canceled their contracts due to their lack of faith in her. Even though “L. M. Gilbreth” was invited to several Engineering clubs to give a talk, she was denied entry when they found out that “L. M. Gilbreth” was a woman.

Lillian Glbreth has earned her own place in the world of Industrial Engineering and Lean. She was recognized by President Hoover to join the Emergency Committee for Unemployment. She designed and created the successful “Share the Work” program to create new jobs. She was a consultant to several companies and the Federal Government. She was the first woman to be elected into the National Academy of Engineering, and she was member number 1 at the Society of Woman Engineers. Lillian Gilbreth passed away in 1972 at the age of 94.

I will finish this off with an interesting anecdote from the Gilbreths to show the way they thought. Soon after getting married during their honeymoon, Frank asked Lillian to produce a list of qualifications she was bringing into their “partnership”. (Source: Digging History)

Perhaps Lillian Gilbreth’s other great accomplishment was raising her family which included 12 children while making modern advancements in her field. To all the mothers out there – I wish you a happy Mother’s day.

In case you missed it, my last post was Visibilization: Crime Fighting, Magic and Mieruka.