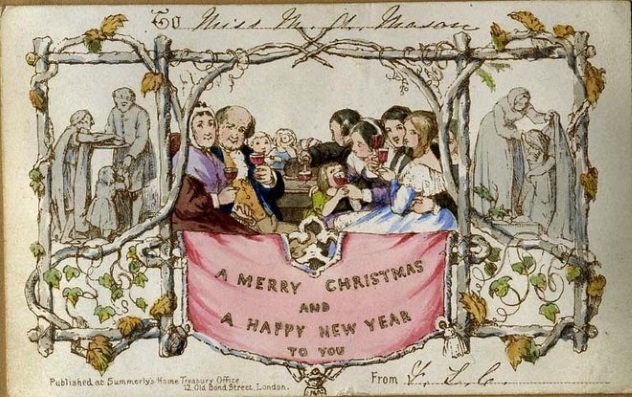 I originally hail from India. My relatives are still living in India. I called them yesterday for Christmas and talked for a while. One thing I kept noticing in the call was that they were saying “Happy Christmas” and my family here in America kept saying “Merry Christmas”. I was curious about this and thought I would research the differences in the phrases. It turns out that the difference is based on which side of “the pond” you are. “Merry Christmas” is quite common in America and “Happy Christmas” is quite common in England.

The phrase “Merry Christmas” has a not-so-merry origin. In 1534, King Henry VIII condemned Bishop John Fisher to death for not recognizing the king as the Supreme Head of the Church of England. The bishop was imprisoned in the Tower of London, and he wrote a letter to Thomas Cromwell, the then chief minister of King Henry VIII. In the letter, the bishop requested Thomas Cromwell provide him a shirt, a sheet, good food, and a priest to hear his confession. The bishop also requested him to talk to the king to have him released. The bishop ended the letter with a “Merry Christmas” wish. The bishop was executed on 22nd June 1535. The king showed the bishop mercy by beheading him instead of hanging him. The phrase caught on and was even used by Charles Dickens in his 1843 classic story, “A Christmas Carol”. Coincidentally, Sir Henry Cole in England commissioned the first Christmas greeting cards in the same year. The card stated “A Merry Christmas and a Happy New Year To You”. Sir Henry Cole produced 2050 Christmas greeting cards that year that were sold for a shilling each.

The credit to replacing “Merry Christmas” with “Happy Christmas” in England should perhaps go to King George V. King George V gave the first Royal Christmas Broadcast through the BBC in 1932. In his speech, King George V wished everybody a Happy Christmas. One of the hypotheses regarding the change of phrase is that the word “merry” has a negative connotation as in being associated with inebriation. The word “happy” on the other hand, is a description of a state of mind and associated with luck (hap = luck). Thus, the people were encouraged to be happy rather than be merry. The royal family started to use Happy Christmas and this caught on to become the favorite holiday greeting in England.

I will finish off with another example of an attractor. Jack Cohen and Ian Stewart in their 1995 book, “The Collapse of Chaos”, talks about two ice cream vendors at a beach. Lets say that Vendor A and Vendor B are both located equidistant from one another between a pier at one end and a rocky point at the other end. Just by luck, Vendor A got more customers than Vendor B on the first day. Seeing this, Vendor B moved a little closer to Vendor A and got more customers. Vendor A now moved a little closer to Vendor B. Soon enough, both the vendors were now next to each other in the middle of the beach. The vendors were not moving towards the physical center of the beach due to the location. Their interaction with each other caused the attractor pattern to form.

Have a Merry Happy Christmas, and Holiday Season!

In case you missed it, my last post was The Information Model for Poka Yoke:

From my children’s perspective though, Santa does make sense. Think of it as a black box; they write what they want in a list, believe in Santa, and on Christmas day they find their toys under the Christmas tree. The output matches the input, repeatedly over the years. This passes the scientific evidence based sniff tests’ criteria. They also find additional evidence in the form of stories, movies, songs etc. of Santa Clause and his magical flying reindeers. From their standpoint, they have empirical evidence for making a decision to believe in Santa.

According to the famous German Psychologist Gerd Gigerenzer, in the 1950s and 60s, the enlightenment notion of reasonableness reemerged in the form of the concept of “rationality”. Rationality refers to the optimization of some function. The optimization can be maximization or minimization. Simon determined that there is a limit to the “rationality” of humans, and his views were against the ideas of a fully rational man in neoclassical economics. Simon believed that we cannot be fully rational while making decisions, and that our rationality is bounded by our mental capabilities and mental models. In his words;

Bounded rationality does not, therefore, argue that decisions and the people taking them are inherently irrational, but that there are realistic limits on the ability of people to weigh complex options in a fully logical and objective way. Bounded rationality therefore concerns itself with the interaction between the human mind (with its prior knowledge, competing value systems and finite cognitive resources) and the social environment – the processes by which decisions are made and how these processes are shaped by the individual and their wider circumstances.

Thus, we do not make the best choices because; we do not have all the information, we do not understand the consequences of all the options or because we do not take time to evaluate all the alternatives. Furthermore we do not always understand that our decision was based on an imperfect model. This leads to the next idea that Herb Simon created – “satisficing”. Satisficing is a word created from two words – satisfy and suffice. In other words, satisficing is the tendency for us to latch on to “good enough for now” solutions. Simon introduced a “stop rule” as part of satisficing criterion: “Stop searching as soon as you have found an alternative that meets your aspiration level.” He later modified it to be a dynamical rule such that the aspiration level or the current criterion is raised or lowered based on previous failures or successes. Gerd Gigerenzer strongly reminds us that Bounded Rationality does not mean optimizing under constraints (finding the best option under the constraints set by the situation) or irrationality (total absence of reasonableness).

In the 2001 book, “Bounded Rationality – The Adaptive Toolbox; edited by Gerd Gigerenzer and Reinhard Selten, there is a chapter dedicated to the role of culture in bounded rationality. This chapter discusses how sociocultural processes produce bounded rational algorithms. Both ethnographic data and computer modeling suggest that innate, individually adaptive processes, such as prestige-biased transmission and conformist transmission, will accumulate and stabilize cultural-evolutionary products that act as effective decision-making algorithms, without the individual participants understanding how or why the particular system works. Systems of divination provide interesting examples of how culture provides adaptive solutions.

One of the examples they cite is the complex system of bird omens amongst the Kantu of Kalimantan (Indonesian Borneo) swidden farmers. Swidden agriculture is a technique of rotational farming. Each Kantu farmer relies on the type of bird and the type of call that the bird makes to choose the agricultural site. This creates a random distribution of the agricultural sites and ultimately helps the Kantu farmers, thus keeping their tradition alive. As a quick and thrifty heuristic, this cultural system suppresses errors that farmers make in judging the chances of a flood, and substitutes an operationally simple means for individuals to randomize their garden site selection. In addition, by randomizing each farmer’s decision independently, this belief system also reduces the chance of catastrophic failures across the entire group — it decreases the probability that many farmers will fail at the same time. All this only works because the Kantu believe that birds actually supply supernatural information that foretells the future and that they would be punished for not listening to it. How many of these cultural traditions do we still carry on in our work lives?

I found this quite interesting and maybe because it is Christmas time I could not help but draw comparisons to how we try to keep the idea of Santa alive for our kids. I thought I would dig into this deeper with my kids. I wanted to push my kids to go beyond their biases and heuristics and try to give them an opportunity to look for more information with regard to their belief in Santa. I started asking them questions in the hope that it would make them reevaluate their current decision to believe in Santa. With enough probing questions, surely they should be able to reevaluate their thinking.

I first asked them “Why do you believe in Santa?”

My youngest responded, “Believing in Santa makes him real”.

My middle child responded, “We saw him at the shopping mall parking lot loading presents in his car.”

My oldest responded with the following facts, “We get presents every year from him. We put out cookies and milk, and they are gone by Christmas day.”

Not giving up, I pushed, “If Santa gives presents to all the kids in the world, I never got any presents when I was a kid in India. Why is that?”

“You were a naughty child”, my youngest responded giggling.

“It takes a long time to get to India”, my middle child also gave her reasoning.

I thought I would give some stats with my questions, “There are about 1.9 billion kids in the world. How can Santa have toys for all of them?”

“That’s easy. Santa is super rich and can buy all the toys he wants” was the response.

“OK. How can he go around world giving toys to all the kids?”, I asked.

“He has magical reindeers” was the response.

Finally, I gave up. My attempts to crack their belief in Santa were failing. I then realized that perhaps it is not bad after all, and that my kids being kids is the most important thing of all. And it makes Christmas more magical for them.

There is always next year to try again!

In case you missed it, my last post was What is the Sound of One Hand Clapping in Systems?