In today’s post, I am looking at Hermeneutics. Hermeneutics is a branch of philosophy that deals with interpretation. It started off as a study of interpreting religious texts. The word has its origin from the Greek God Hermes, who was also the messenger of the Gods (herald) to humans. Hermes’ job was to interpret the words of the many Greek gods to humans. As you go back in time, there was only one interpretation to a religious text, and it was usually provided by the chief priest in charge. The common folk were not allowed to read or contemplate the text and try to interpret the meaning. As time went by, this view changed. The readers were encouraged to be in the shoes of the author and try to interpret the meaning by contemplating what the author meant by trying to be in the same mindset as the author. Important contributions from philosophers such as Heidegger and Gadamer emphasized the role of the observer or the interpreter in seeking understanding. This meant that the prejudices, biases, belief systems, traditions etc. of the interpreter are important in the act of interpretation. It is meant to be a tango, rather than merely watching a solo dance. My post is heavily inspired by the German philosopher Hans-Georg Gadamer.

One of the ideas in Hermeneutics is that of the Hermeneutic circle. A good example to explain this is to imagine an interpreter reading a sentence of a text. He starts with a word and as he reads the word, he is trying to figure out what the word means in the context of a sentence. He has an idea of what the word means. As he finishes reading the sentence, he re-evaluates the meaning of the word in the context of the full sentence, and he gains an additional understanding of the word, which in turn yields an additional understanding of the sentence. Contrast this with the idea of the parts to a whole. Understanding a part provides an understanding of the whole, which in turn provides an understanding to the part, and so on the circle goes. One can use the same idea with a sentence and the paragraph, a paragraph and the chapter, and a chapter and the book. The meaning is truly holistic and greater than the sum of individual meanings of the words. The order of the words matters very much in the final meaning of the sentence. The relationship of the part to the whole is depicted in the hermeneutic circle below. Analysis is the act of taking things apart, while synthesis is the act of putting things together. 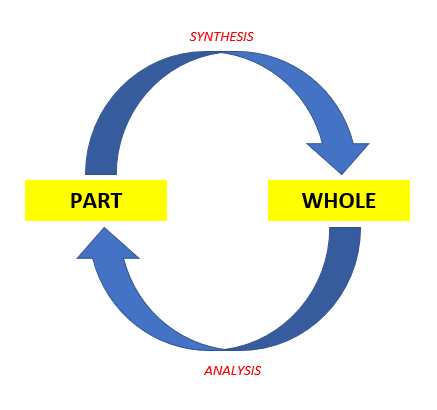 Today, hermeneutics does not stand for interpreting texts alone. It has come to represent the art of interpreting to improve understanding. This could be in relation to what another person is saying or related to learning a subject and so on. The most important act of hermeneutics is the act of asking questions. From this standpoint, the guiding principle to keep in mind is that the most important question is the one that has not yet been asked. This aligns with the hermeneutic circle, in the sense that we have to keep going back and forth to generate improved understanding. This is an ongoing process and never meant to be just one iteration. I like the representation of the hermeneutic circle as a spiral, where the spiral gets smaller and smaller, indicating a churning or generation of improved understanding. I have also seen it as a diverging spiral where the coil gets larger and larger to indicate an expansion of understanding.

One analogy that Gadamer used in his hermeneutics was a “horizon.” Much like in the horizon of a landscape that we see, Gadamer used the horizon to depict the limits of our understanding. Gadamer expressed the horizon as the totality of all that can be realized or thought about by a person at a given time in history and in a particular culture. Gadamer said:

The horizon is the range of vision that includes everything that can be seen from a particular vantage point… A person who has no horizon is a man who does not see far enough and hence overvalues what is nearest to him. On the other hand, “to have a horizon” means not being limited to what is nearby, but to being able to see beyond it

The concept of horizon suggests itself because it expresses the superior breadth of vision that the person who is trying to understand must have. To acquire a horizon means that one learns to look beyond what is close at hand – not in order to look away from it but to see it better.

Similar to the landscape, the epistemic horizon changes depending on where we stand and what our perspective is. Where we are situated is based on our tradition, history, belief system etc. and is also bounded by the cultural and societal underpinnings. One may have an urge to see the horizon as a constraint holding us back, but Gadamer, similar to his view or prejudices, expresses horizons as fertile constraints enabling us to further our understanding rather than limiting our understanding. We are bringing something to the new understanding, something that is internal to us rather than relying solely on the experts or the people around us. This is the idea of Hermeneutics for Gadamer. An important idea that Gadamer talks about is the fusion of horizons. This is such a beautiful expression. We should resist the urge to explain this away as simply combining two different horizons or perspectives or the larger idea swallowing up the smaller idea or the weak idea giving way to the stronger idea. Gadamer views the fusion as a transformation which is prompted by the differences in the horizons. Gadamer wants input from both horizons to generate the fusion. This can happen only if we are open and willing to understand while at the same time not ignoring that we have our own perspectives that might need to be changed to gain a better understanding of the phenomenon in question.

Contrast this with the view of just doing as we are told or learning subjects in a rote fashion. Gadamer wants us to bring something from us, our horizon to the hermeneutic act. We should do so, so that we can change ourselves in the process. Gadamer wrote:

What I described as a fusion of horizons was the form in which this unity [of the meaning of a work and its effect] actualizes itself, which does not allow the interpreter to speak of an original meaning of the work without acknowledging that, in  understanding it, the interpreter’s own meaning enters in as well.

We will never be able to stand in another person’s shoes or try to interpret their perspective in an objective fashion. Gadamer is pointing out that we have to do it from our own horizon since that is all that we have access to. When we hear about “respect for people”, we should start with the question, “what does it mean to me?” What does it mean from where I am situated right now? With an open mind, if I start reading about this subject, I may gain a better understanding. This understanding is made better when I allow my horizon to be transformed. The transformation also requires the understanding of what “respect for people” means to Toyota. I cannot ignore my prejudices but rather I should use them to my benefit. The label “handle with care” does not mean that I should not handle the box at all. But rather that my interaction or my handling of the box should be with care. The hermeneutic act is dynamic, personal and perpetual.

I will finish with a quote from Gadamer to reflect further:

In case you missed it, my last post was Newton’s Eye/Bodkin Experiment and the Principle of Undifferentiated Coding:

4 thoughts on “Hermeneutics at the Gemba:”